Just screwin' with ya. Last summer didn't even happen. This game was hypothetically made for AGM's and GotchaGotchaGame's Pixel Game Maker MV 2020 'Game Development Challenge'. It's the honest truth.

Digital artist StudioDaeera (creator of Coma State Eden) and chiptune composer Firespike33 have reluctantly agreed to collaborate once again to bring you a piece of art that just might happen to be an interactive video game if you squint at it.

It's summer and things aren't looking good. The military's out for crab blood...your blood. Not even COVID-19 will slow them down. Don't become another failed flavor of ice cream: run for your freedom and escape from the military!!!

As Crab Man, you'll have to watch out for military goons, irresponsible mothers, enemies who run in the opposite direction to you (obstructing your forward motion) and even an environmental hazard that's seemingly warming up the environment with dangerous consequences that are totally not cool unlike the summer.

...Hold onto your lunches—this game is seriously brutally violent...but that's okay. We asked PGMMV about it and they said it was fine!!!

The entire game controls with just movement inputs:
That would be the arrow keys on a keyboard,
and the left control stick/d-pad on a controller.

This game is crazy! Endless runners aren't really my genre, but there is some quick fun to be had, and this one is pretty addicting. I like the random aspects of it, like which power up you get, and at some point, there was a surfer dude at the beginning, along with a pitfall, instead of a soldier, though that only happened once. But those kinds of unpredictable factors make it a bit more interesting and less monotonous.

The timing of the jumps took some getting used to. I'm still not sure how to deal with a soldier shooting a bullet at you, since if I jump over the bullet, it's pretty much impossible to avoid running into the soldier and attack him fast enough.

I also really appreciate the ability to play this game one-handed. Having everything you need in 4 directional buttons can be really helpful for people with accessibility issues. For me personally, it would allow me to use my other hand to get a drink or eat a snack, which is handy, haha.

The theme is wacky and fun, and I really enjoyed it. The sense of humour adds a lot of likeability.

I felt like the game over and high score screen were a tad slow. I mean, they're not slow in themselves, but when I die and I'm just eager to jump back into it and try again, I think it would be nice to skip or fastforward through the Game Over and High Score.

This game is ridiculous and I love it. Every run is frantic and over-the-top, but playing is easy to grasp with basic trial-and-error. Even if one sucks, (which the game over screen happily tells you without a new high score), it's addictive to keep playing. Adding the skip feature for another run was a good touch.

It's crazy how well the presentation looks, let alone how the game plays, for a jam. I'd been curious about Pixel Game Maker MV for a while, so I'm glad Crabby is such a blast in that engine.

This was so fun to play, the dark humour had me laughing a lot.

It's pretty hard at first but I soon got the hang of the basic mechanics. It was a great feeling the first time the game over screen told me that I didn't suck so much.

After many attempts I was able to buy some stuff from the shop and was soon carving a path of blood and destruction through the beach. I was only able to try out a few of the upgrades so far but they were really fun.

Love the humour and it's addicting to attempt run after run. Could use a few tweaks to the hitboxes and text scroll speed, but it's a fun time once you start to get the hang of the mechanics

my current high score is 7694, doubt anyone can beat it XD

but for real, this game is awesome, can't wait to unlock the air throw

I've been following Daeera since I found their submission for Coma Eden, and this one is a bit simpler but the humor is SO good. Also, you can throw pigeons!

Really fun game!! I got a little crabby at first, but after getting a hang of the mechanics it was really smooth and played well!! Awesome soundtrack and sound effects too!! 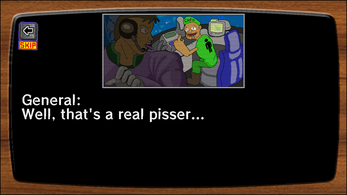 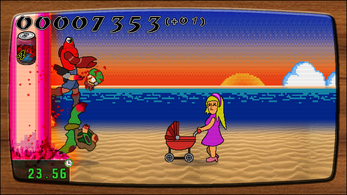 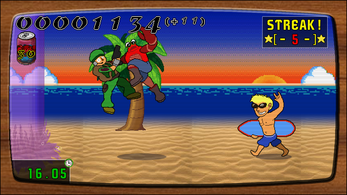 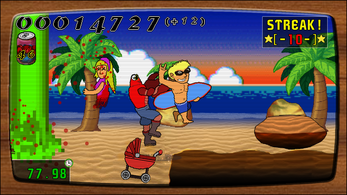 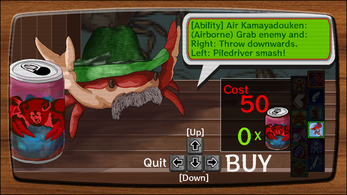 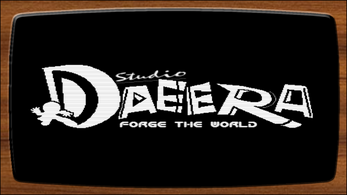